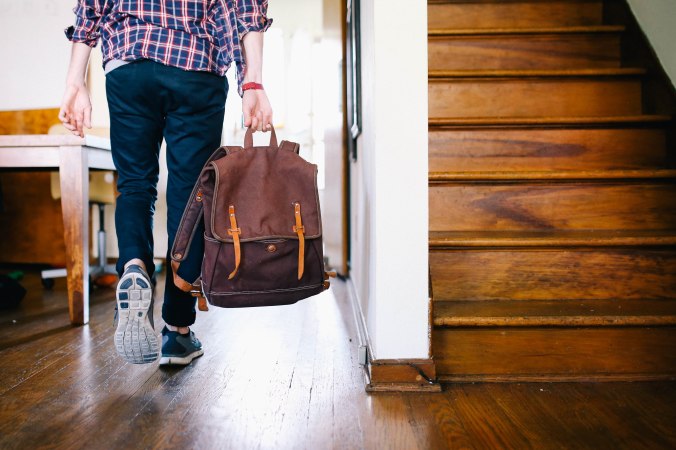 In the mid-80s I was finishing my somewhat checkered high-school career in a 3rd, no, scratch that, 4th world country somewhere in Latin America.  I lived with my mother who is a highly educated, brilliant woman who, nevertheless, was not paid very much at that point in her career.  Anybody familiar with 3rd world countries knows that scratching out a living is a challenge.  If you can make it there, you can make it anywhere – forget NYC, which is a cakewalk in comparison.

Anyway, we had a standard of living that you might call middle-class for that country (whose middle-class was very small indeed) but would probably be considered poverty level in the US or Europe.  I should add that as blonde-haired, blue-eyed young man I rather stuck out in the neighborhood.  (NB:  I am American born to US parents, I just wasn’t born nor spent most of my formative years there).   Without straying too far into the minefield of political correctness, suffice it to say that without money in a place like this you are powerless.  I learned early on that many people of who have any sort of power love to see desperate people squirm.  I had a very hard time with that dynamic, it stuck in my throat.

It wasn’t all bad.  I wouldn’t have swapped growing up there, at the time that I did, in the way that I did, for anything.  It’s an amazing country, culturally vibrant, amazing beaches and blessed with a very funny, welcoming populace.  I was an overwhelming minority, and people brought it to my attention all the time, but it was usually not mean-spirited. It was so much fun that, upon discovering partying and girls, I pretty much kissed my high school career goodbye.  In spite of outstanding SAT scores and potential, I barely graduated from high school.  2 weeks later my long-suffering mother wished me well and put me on a plane for States.  I was 18 years old, I had a few hundred dollars in my pocket and vague plans of either living with my sister (who was going to college) or some high school buds who were in very similar situation.  I hadn’t bothered to apply to any colleges because my grades and financial situation meant it wasn’t an option.

Given my level of maturity and proclivity for partying, I lasted roughly 3 weeks with my sister before she gave me the heave-ho.  I didn’t have any hard feelings then, nor do I now.  It was best for everyone that I go.  So I took the train a few hundred miles up the East coast to join up with my aforementioned pals.  The five of us managed to score a small studio that was leased to one of the guys’ older brother.  We had 2 twin beds and 3 additional mattresses on the floor.  We had to be very careful about not drawing attention to ourselves given we’d have been thrown out if the landlord found out 5 guys were living in 1 studio.

Failure was not an option and that realization clarified my goals and game-plan almost immediately.  I knew I was in for a few years of hard-slogging so I resolved to make the best of it.  Crappy, minimum wage dead-end jobs weren’t going to cut it as they were a waste of time and potential.  I took the best-paying jobs a mere high school graduate could hope to score, but also ones that would hopefully allow me to progress to better jobs.  I started working in high-end restaurants, first as a dishwasher, then bus-boy, waiter, apprentice baker and eventually as a commis.  Restaurant work was exhausting, but it was an education.  There were periods when I held down 2 jobs.  All the while I lived in series of horrible apartments in crappy neighborhoods with, of course, room-mates who were in similar situations.

I eventually scored a mail-room gig in a bank in the financial district.  I mean, this was straight up old school – I don’t think mail rooms even exist any more.  Basically I delivered mail, and written memos (common use of email – and networked PCs – where still a year or 2 down the road) as well as performed a number of odd-jobs.  I busted my butt and hustled on every single task because I knew it was the only way to get noticed.  I eventually was promoted into “Data Processing” (the IT department as it’s generally known now) and I was off to the races.  I began to acquire valuable skills that enabled me to find better paying jobs, pursue my college degree (while working full-time) and, some years later, finally get an apartment all to myself.  This was the Holy Grail, a studio in a trendy downtown neighborhood.  It was also strangely lonely at first, after so many years of living with friends.

I finally had my own apartment, a college degree, a less than impressive used car and a decent job that employed both my IT and language skills.  I traveled often to Latin American, Africa and Europe for work.  I’m happy to say that all of my pals from the “5 guys in a studio” days had similar trajectories.  So there came a point when we were victims of our own success in the sense that people began to move away to follow their careers.  I had just turned 30 and I didn’t have a whole lot of reasons to stay.  Many of my friends were moving away and I had just ended a serious relationship.

This was at the height of the “internet boom” of the 90s.  I realized that I had been working very hard over the last 12 years, often taking, at best, a week of vacation per year.  I figured that I could probably find another job pretty easily.  So I quit my job to go backpacking for a few months through Guatemala, Belize and Mexico with these French girls I knew.  I have never, before or since, taken off that much time just to do my own thing.  For those of you who know Mexico, at the time Playa del Carmen was a village where we rented hammocks on the beach for 3 dollars a day (i.e. you slept in them) and there was virtually nothing in Tulum.  Hanging at the beach all day and sleeping under these huge palapas, surrounded by legions of hot euro-babes, I though I had died and gone to heaven.  Not to mention the cheap tacos, ceviche and beer.

When I got back to the US, I found out that I had scored a 2 year contract in Europe was welcome news as I was short of funds and I was itching to move.  So I did, and I’ve been here ever since.  I’ve only been back a few times given most of my family is living elsewhere.

I often wonder if my trajectory would be possible for a young guy starting out now.  I sincerely doubt it.  Firstly, I did not have to deal with globalization so I was competing for jobs on a national, not international level.  I was at the tail-end of the last generation when it possible to pull yourself out of the muck without impeccable academic credentials.  Also, by going to a very good state university (partially subsidized by my job) I graduated without crippling debt.  In my generation, having any college degree on your CV was good enough to get your foot in the door.   From what I hear and read in the US media, that is not the case any more.

As a father and somebody who interacts a fair amount with younger people, I always try to stress that excelling academically is actually the best way, to “hack” the system.   If you’re a young person blessed with the common sense to not go off the rails academically AND have a good idea of what you want to do in life, you have an enormous advantage.  I was able to find a reasonable level of success, but I worked extremely hard to do so.  Young people these days do not have the luxury my generation had of going to college to “find themselves” or earn less than practical degrees.  In the age of outsourcing, you best choose your academic path extremely wisely and pursue that career to the best of your ability.